When I was a teenager, I had a paper route, and one of my duties was to collect past due subscriptions from my customers. I remember on several occasions going to the customer’s house, and I would see cars in the driveway, and I could hear people shuffling around inside, but when I knocked on the door, no one would answer. So I would knock again, but they still wouldn’t answer. It was if they were saying to me, “I know you’re knocking, but you can’t come in!” And it really made me mad and hurt my feelings that they wouldn’t answer the door.

If a few delinquent debtors bothered me because they wouldn’t come to the door when I knocked, think of how the King of Glory-Jesus Christ must feel when He knocks on the door of people’s hearts and their response is “I know your knocking, but you can’t come in!” As we will see in today’s lesson, those who ignore the Lord’s presence are in grave danger, because by ignoring His gentle tap at the door, they insult Him and even sicken Him  the point He says to them, “I will vomit you out of My mouth!” 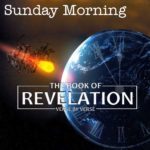 Calvary Chapel Of Lafayette, Louisiana
Revelation 3:14-22 - I Know You're Knocking But You Can't Come In