Before the invention of mapping satellites in the 20th Century, there were all sorts of explorers who made expeditions to the Middle East looking to find the Garden of Eden. Quite a few of them claimed to have located the actual place where the Garden originally was before it was destroyed (possibly in Noah’s Flood or by some other catastrophe), but they offered little proof. But I think as we examine today’s text, we can make a strong case that Eden still exists, yet it won’t be found by any explorers, because it exists in an inapproachable place that’s guarded by angels with the task of keeping sinners like us out. 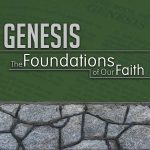