Back in 2014, Rickey Wagner, a public transit bus driver in Dayton, Ohio, was attacked by three teenagers, and they shot him three times point-blank range. One of the bullets hit him in the leg, and the other two, which were aimed at his heart, were stopped by a New Testament he had in his front pocket. Dayton Police Sgt. Michael Pauley told the local TV station that “there obviously was some kind of divine intervention involved in this incident.”

Was it divine intervention or was it just plain luck that Wagner’s pocket New Testament saved his life? We can’t be sure, but one thing we can be sure of is that the Bible is not some kind of magical book that protects us from harm. No! As we will be reminded of in today’s lesson, the Bible is much greater than any magical book. It is a supernatural book that contains the living word of God. Its purpose is not to protect us from bullets or to bring us good luck; its purpose is to supernaturally change us into the image of Jesus Christ! 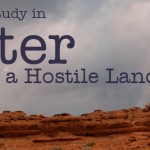 Calvary Chapel Of Lafayette, Louisiana
1 Peter 1:22-25 - Much Greater than any Magic Book